Today's article it's a review of the ryzen 3 5300g seeing how it stacks up against AMD's other APU's that are currently out there and seeing whether or not it's worth checking out let's talk about all that the ryzen 3 5300g is probably what I would consider the best positioned APU that's out there the 5600g the 5700g both are great for enthusiasts with six and eight cores respectively but a lot of the people who are buying APU's can get by with four cores and eight threads and the GPU upgrades that they make down the line likely don't need those higher CPU core counts I actually think that the 2400g and the 3400g hit a sweet spot with their core and thread targets even if the GPU performance was slightly underwhelming but that's not the case with the Ryzen 3 5300g. 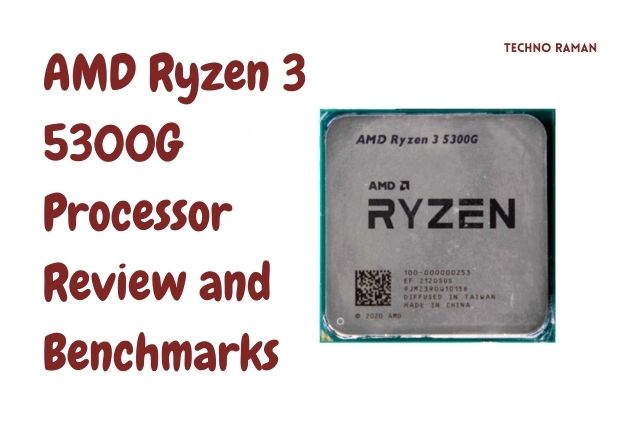 We have 4 cores and 8 threads on a zen 3 CPU the setup we have 8 megabytes of L3 cache which notably is less than the other APU's AMD is launching the 5600G and 5700G both have 16 megabytes the 8 megabytes in the G is more similar to the previous generation APU's that AMD has launched we've got a base clock of 4 GHz a boost clock not that much higher 4.2 GHz with a 65-watt TDP it has the same limitations as the other APU's AMD's launching with PCI express 3.0 and then on the GPU side we have vega graphics coming in with 6 GPU cores and 1700 MHz as far as pricing goes.

AMD hasn't released anything the 5600g is selling for 259$ right now it is available in some pre-builts they're not readily accessible but I'm hoping if AMD ever does launch this it's probably in like the 100 - 130 $ price point because that's where it really makes a lot of sense I'll be directly comparing it to the ryzen 3 3100 later on but 99$ for the 3100 you tack on the APU that gets you to 129$ same prices as the 3300x you can choose between those two but you get zen3.

Let's move on and see what the gaming performance is like on the APU because that's probably why many people are going to start with no dedicated graphics card with these chips and only export AAA or the best titles. This means we're coming to a resolution of 720p with all settings turned down to the lowest I'm doing this for all my APU testing because if you're using one of these apps I really don't mind I don't matter. If you pick it up, you should sit there. Squeeze 1080p in some of these games, but you're going to go down to 30 fps at the time and I think really targeting 30 fps, even 60 in some of these games, is the right way to go. could be the way.
Let's take a look at the benchmarks and we can compare them to AMD's 5600g so you get an idea of ​​what you're missing out on by going with this lower end chip starting in Cinebench in the Cinebench R15, CPU Multicore 1091 in single-core and 186 in single-core, which is 23% and 15% slower than the 5600G in Cinebench R3. That's roughly the same percentage difference between the two 37% slows on the multi-core and the 17% slows on the single-core, it makes little sense given the fact that the 5300g has 33% fewer cores than the 5600g.

Let's find out in benchmarks how well this ryzen 3 performs and, to be honest, it really happens Remarkably close to where Ryzen 5 5600G sits in most games a Some 30 fps difference that's likely to come Because the CPU is less powerful but actually those are six GPU cores Allow 5300g to maintain very high speed. Start from Horizon Zero Dawn we managed to get a 45.8 fps Average while 5600G got 47.9fps. In Red dead redemption 2 we managed 38.7 fps but that one's a little bit further off from the 5600G. Fortnite we managed a 136 fps average within 4% of the 5600G. Cyberpunk 2077 we got less than 30 fps average coming in at 28.2FPS and that's 11% off the 5600G Crisis remastered we managed 63.9 fps at 720p low quite good there about 6% difference between those two chips Metro exodus came in at 42.5 fps average which is about 30% off of the 5600G and then Valorant again probably because of the CPU bottleneck we managed to 174.1 fps which is 28% off of the 5600G in The witcher 3 we managed just below 50 fps which puts us 8% in line with the 5600G Death straining was 51.4FPS only 3% off with that one Shadow of the tomb raider 63.2 fps which is a 4% difference GTA 5 we manage 123.1FPS  which is an almost 10% difference between the two chips COD warzone we managed almost 60 fps averaging 57.9FPS which is an 11% difference between the two Assassins creed Valhalla 42.2 fps average which is a 6% difference and then the closest benchmark yet Borderlands 3 coming in at 60.9 fps which is only 0.33% off of the 5600G so getting remarkably close now these next two games I actually did not test on the 5600g so this is going to be the 5300g by itself Control we managed 50.4 fps Resident evil village with AMD's FSR turned off we got 58.3 fps but when you turn fsr on the game looks like crap but in performance mode, we managed 88.2 fps so fsr does make a pretty decent difference when it comes to apus actually gave us nearly 30 fps more in resident evil village and as that technology starts to roll out to more games that actually matter it's going to be a quite good uplift for apus moving forward and then in all of the testing that I did that chip never got above 40 degrees celsius I have it on a  240mm aio in my test bench system and it just it stayed super cool it was actually remarkable so overall the ryzen 3 5300g looks like a really solid chip 720p gaming is quite good it's cpu performance nearly in line with what you would expect from a four core zen three chip I'm actually highly impressed by it this is actually the only way that you can get four cores on zen three at this point so it it's great but AMD's not selling this directly to consumers at this point and hasn't indicated any plans to do so which is a real letdown.
All these games have the lowest setting which is at 720p resolution.

AMD's APUs are really good on this generation of the 5000 series, with the Zen 3 CPUs clearing a lot of the bottlenecks. GPUs have continued to rise year over year, even though they're still using the Vega architecture ryzen 3 5300g if you can find it in a system that really makes sense in value. I would say that is a great value for the end consumer. That's all for today. If you have any questions or suggestions, please let me know by commenting.