full review of the i5 12600K and compare its performance to the Ryzen 5 5600X. We'll also test gaming and productivity benchmarks of both CPUs.

In today's article, we'll take a full review of the i5 12600K and compare its performance to the Ryzen 5 5600X. We'll also test gaming and productivity benchmarks of both CPUs. How much FPS do these CPUs give and more so let's start the review. 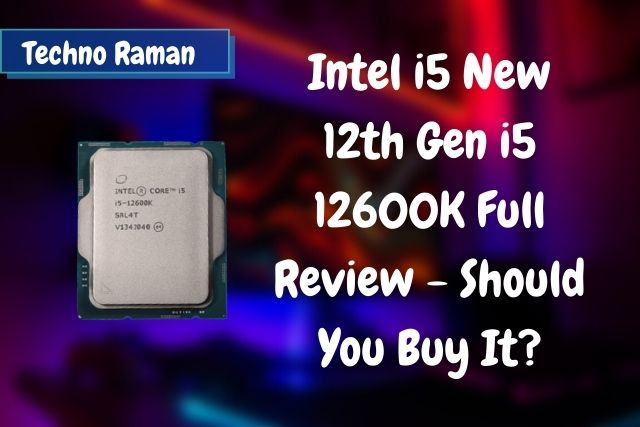 This is a 10 core CPU with max speed of 4.9GHz for Performance-cores and 3.6GHz for Efficient-cores it comes with 20MB cache and consumes between 125W and 150W power price of this CPU is $290, lets assume 300 USD and in Indian rupees it will around 21 thousand without taxes after adding the taxes it should cost around 26 or 27K INR This CPU also comes in a KF variant which has no iGPU whereas 12600K features UHD 770 iGPU.
Let me tell you the 3 main conclusions of in this article which we'll discuss in detail.

the top tier Ryzen 9 5950X gets defeated by i5 12600K in single core performance when tested in Cinebench R23. We'll talk about this with benchmarks.

No difference in Gaming performance

There is no major difference in gaming performance when compared with i5 11600K and 5600X.

So it does provide a good value in multi core performance lets start with single core benchmarks tested in Cinebench R23 before going further please note that you can only compare R23 scores with R23 scores of other CPUs only you can't compare your CPU scores of R20 with R23 version if you want to compare your CPU performance then upgrade /install R23 and then run benchmark test Cinebench R23 benchmarks can't be compared with older versions Ryzen 9 5950X has scored 1611 points in single core performance i5 12600K scored 1830 points in single core and you can see difference is big though gaming performance still remains almost the same but in multi core there is realworld difference which you'd notice. But apps/task which depends on single core performance majorly will see improvement which is good I will tell you why there is no difference in gaming but for now lets continue with benchmarks 11600K scored 1540 points whereas 12600K scored 1830. you can clearly see the difference big improvement from 11th gen but the price is same as 11th gen which is great and the price also closer to ryzen now lets talk about multi core performance. 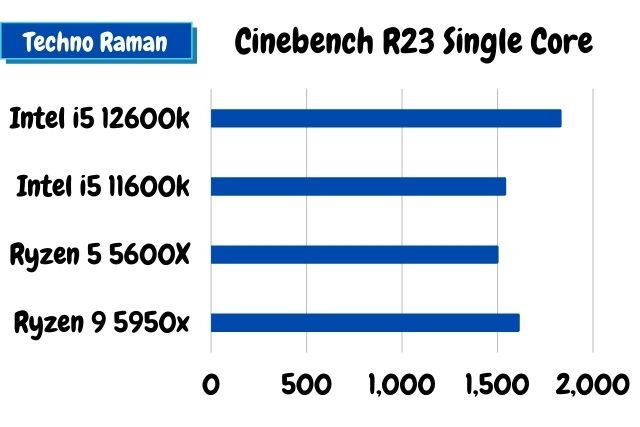 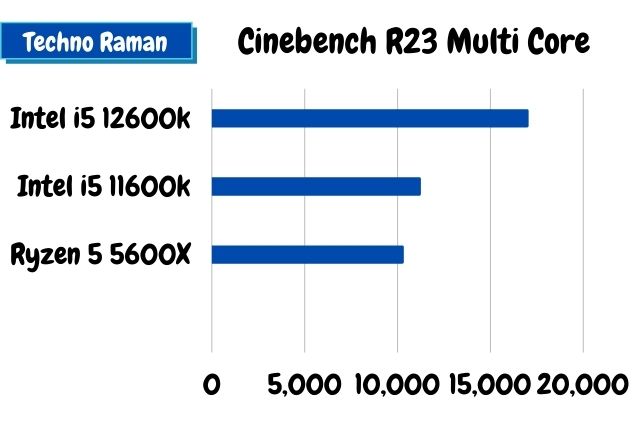 Now lets talk about DDR4 vs DDR5 performance so this CPU supports DDR4 and DDR5 both types of RAM and different DDR4 and DDR5 motherboards will also be available to choose so if you are thinking that you will buy DDR5 and get a lot of performance out of it and have high expectations from DDR5 then let me tell you that its completely opposite DDR4 and DDR5 performed very similar and were on par in the testing you will not see any difference in games and benchmarks if you plan to buy DDR5 motherboard and RAM kit So going with DDR4 is a better decision as DDR5 is expensive and motherboards for the same are also high priced compared to DDR4 DDR4 memories and motherboards are pretty cheap and not that expensive.
Talking about cinebench points, DDR4 and DDR5 both gave similar scores in gaming also DDR5 didn't helped to increase fps and results were same as DDR4 in some games DDR5 reduced the fps and performed below than DDR4 so this means DDR5 is giving reduced performance in many games for now these things clearly says that buying DDR4 is a good choice for now DDR5 seems to be very early for now. 5200MHz and 4800MHz DDR5 RAMs are performing same as DDR4 3200MHz. This indicates that DDR5 is way ahead of its time. It's not needed. Companies should wait and save their resources

Now let's talk about gaming benchmarks, you must have noticed that 11600K, 5600X and 12600K did not show any major difference in game FPS as many games still use single core performance and not multi core.
According to Intel, the 12600K will perform better in Windows 11 because it better understands the new hybrid architecture scheduling functionality. Games will be more optimized but still many games do not use multiple cores. The 5600X and 11600K are already pretty good at gaming and all perform at the same level as many games still don't use multiple cores and rely on single core performance. Some games max out at 6 or even 8 cores. and use the rest of the cores even if they are not available.
If you have an 11600K or 5600X and were wondering whether or not you should upgrade to the 12600K, you may have found your answer. The answer is no. You should not upgrade. Reasons why 11600K 5600X and 12600K are giving almost same performance in gaming there is no big difference so upgrading would not be a good idea But if you have Ryzen 3600 then you can go for 12600K upgrade it will be a better option 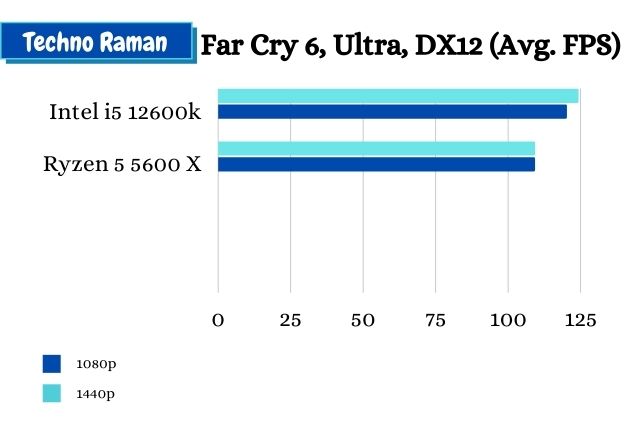 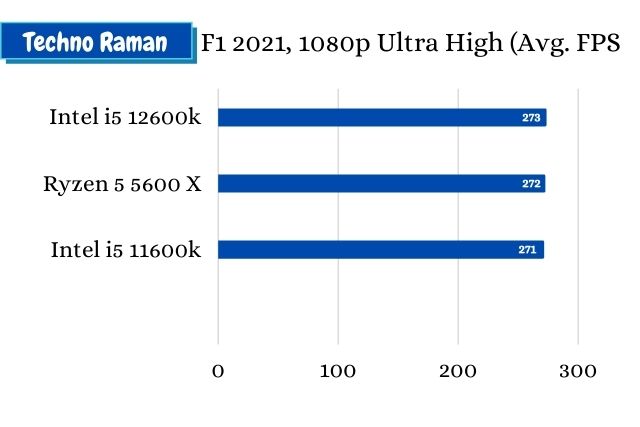 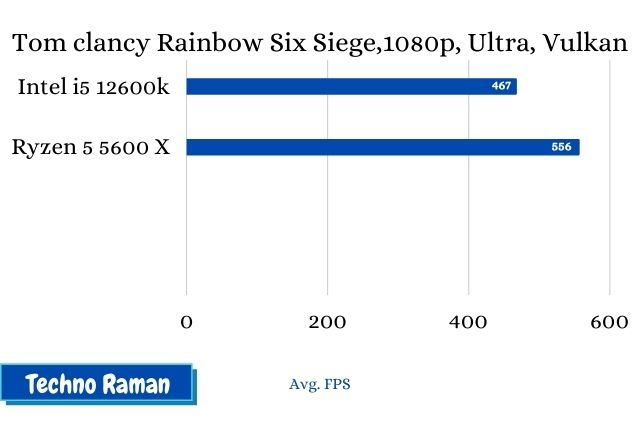 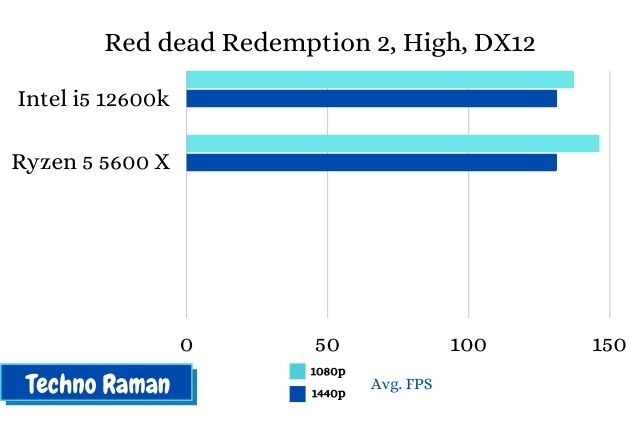 Now lets talk about mulit core productivity benchmarks we used DaVinci Resolve Studio to test 4K Raw Blackmagic 6K Footage with Luts export times 6K footage was RAW and with Luts i5 12600K completed 10min 4K  export in 486 secs 11600K exported in 737 seconds 5600X was the slowest and completed in 700 seconds the benchmarks clearly shows that 12600K is performance excellent in multi core works. This CPU is excellent for video editors and people who use multi threaded applications not only you will get good gaming performance but if you are video editor and do a lot of editing and also use other multi core softwares then this cpu is powerful enough to fulfill all your multi core needs so in multi core its giving good and killer performance and its definitely worth buying if you want to save that 300 seconds export time that you should go for it so this was i5's 12th Gen 12600K Review with gaming benchmarks. 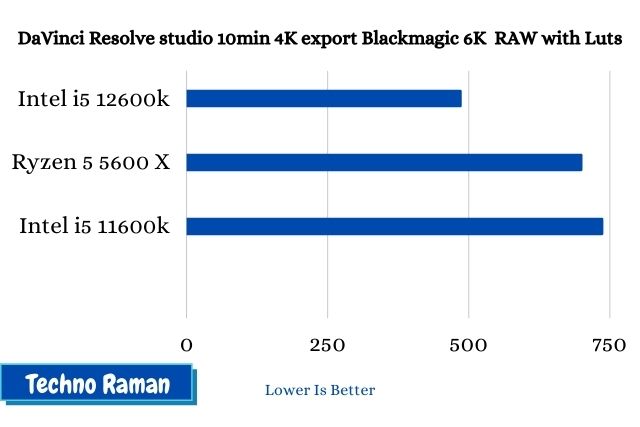 Guys, today I have given a review of i5 12600k and told you by comparison which processor will be right in your budget, hope you have liked this article today. Bye

What types of jobs can bloggers do? - Techno Raman

Which is the best gaming processor in 2021?