So, entry-level graphics cards from both AMD and Nvidia are now on the market. I agree that budget gamers are disappointed. The reason you know is the pricing and we can't do anything about it. I would not recommend you to buy 1660 super. Nor would I recommend buying the 1650 Super. It is being sold at a higher price. The value for money and performance ratio is very low. But, for now, the RTX 3050 and 6500XT are your entry-level alternatives to AMD and Nvidia. I would like to tell you about these two which is better because if we look at their pricing depending on the model you buy around 4-6K then the average price difference is. So, which one should you get is today's question. In this article, I have detailed 1080P benchmark power consumption, ray tracing benchmarks, in which we have tried to cover everything. So, if you are thinking of buying one of these and you want a complete review on what you should buy, then this guide is for you. Let's talk about the test bench to benchmark these graphics cards. The processor used here is AMD's Ryzen 9 5950X. The motherboard used here is the MSI X570 Godlike. The RAM used here is a 16GB memory kit with 2 sticks of 8GB each and has a frequency of 4000 MHz. The power supply used here is the Corsair RM 850X PSU. Now the information is for benchmarking, I have used 1080p resolution here. 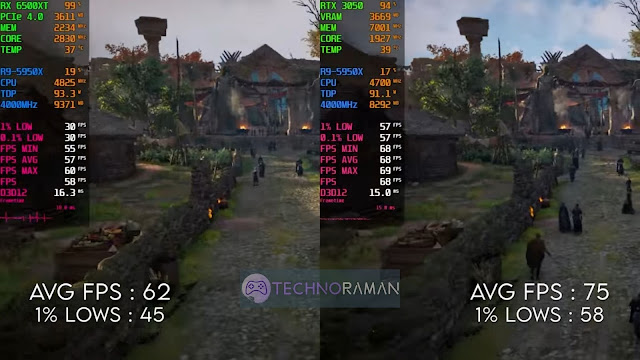 The first game is Assassin's Creed Valhalla. Running on medium settings. Here, the RTX 3050 is 21% better than the 6500XT. 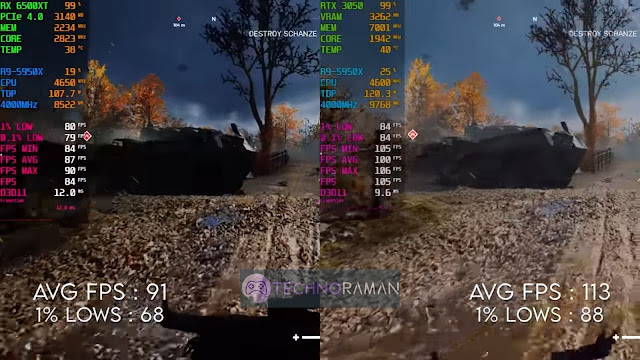 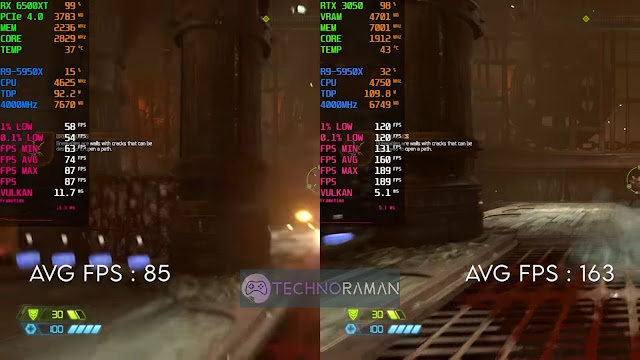 The next game we have is Doom Eternal running on high settings. Here the RTX 3050 is 92% faster than the 6500XT. And the 92% number is a huge difference, to be honest.

The next game is Metro Exodus running on high settings with texture filtering set to 16X. Even in this game, the RTX 3050 delivers 24% better performance than the AMD 6500XT.

The next game is Shadow of the Tomb Raider running on high settings. Anti-aliasing is set to SMAA. Even in this game, the RTX 3050 delivers 38% better performance than the AMD 6500XT.

Next up is the latest released title Far Cry 6 running on high settings. Anti-aliasing is set to OFF. In this game, the RTX 3050 delivers 29% better performance than the AMD RX 6500XT. As you can see, the 3050 is winning every game and I want to point out that we have run 6500XT on PCIe Gen 4 4X Config and in this configuration, AMD's RX 6500XT loses. 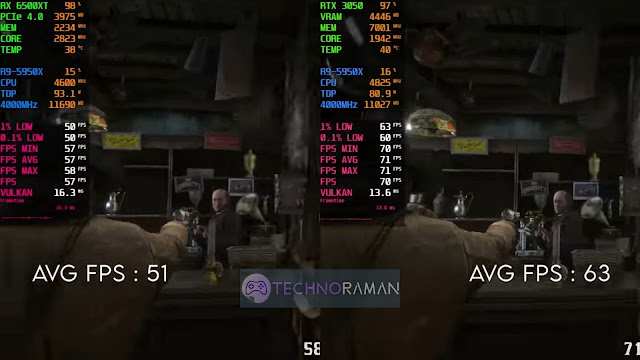 The next game is Red Dead Redemption 2. I have run it on high settings. Here, the RTX 3050 delivers 24% better performance than the AMD 6500XT. One thing I want to tell you is that the games I've played on high settings were tied to the 6500XT VRAM because it consumed the total amount of VRAM. 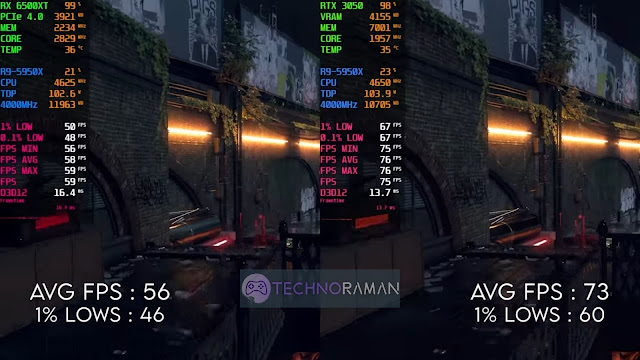 The next game is Watch Dogs Legion. Running on high settings. We get 30% better performance in this game when compared to the AMD 6500XT. 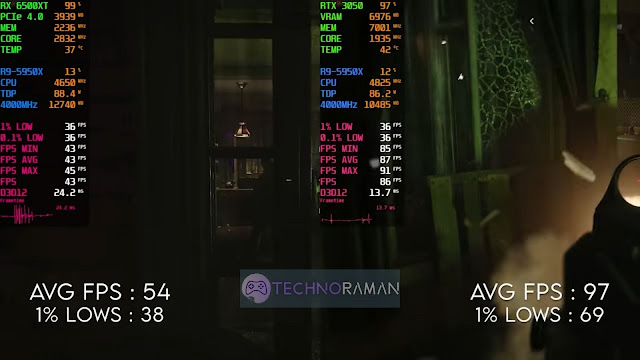 The next game Call of Duty: Black Ops Cold War is running on High settings. Anti-aliasing is set to low. In this game, about 80% better Performance is Seen with the RTX 3050 Can You Believe It is 80%? 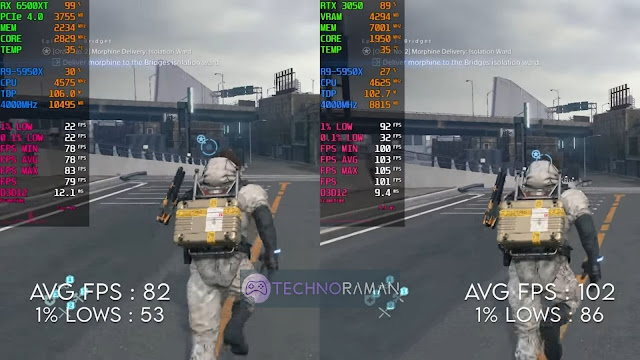 The next title is Death Stranding. Very High is running on pre-sets. Here the AMD RX 6500XT performs 24% slower than the RTX 3050. listen carefully to the next game because we have some next-level performance differences. This game is Marvel's Guardians of the Galaxy. Running on higher settings, I won't even tell the percentage difference here because you'll be shocked I'll tell you how many times better the 3050 is in performance. So here RTX 3050 is 3.742 times better performance than AMD RX 6500XT. And to be honest, it's a shame for the 6500XT. 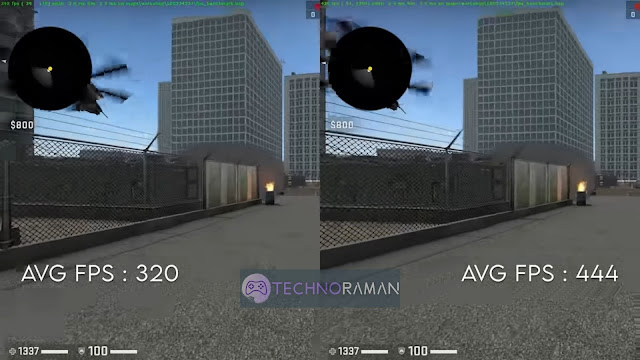 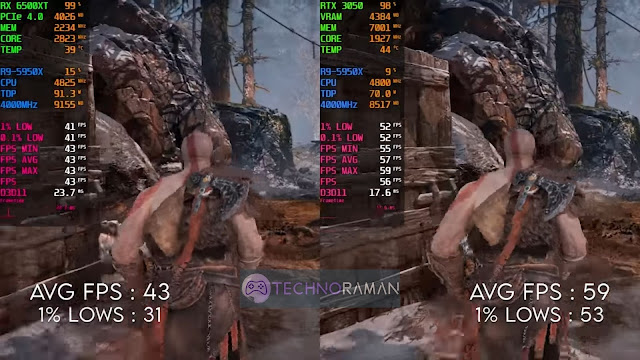 Continuing with the latest released AAA title, which is running on high settings, God of War. The 3050 again outperforms the RX 6500XT by 37%. 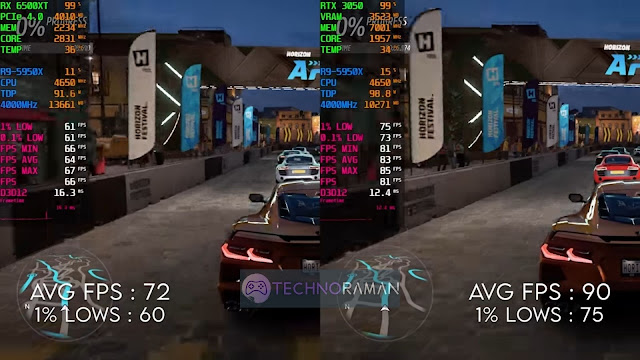 The last game here is Forza Horizon 5. This game is being run on high settings render scale to quality. RTX 3050 here too The AMD RX performs about 25% better than the 6500XT.

How much difference is in 1080P gaming? 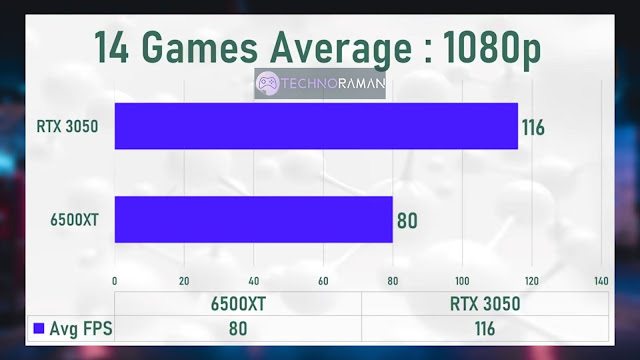 Let's talk about how fast the RTX 3050 is compared to the RX 6500XT, which averages out games overall. So that you can have a better idea of ​​how slow the RX 6500XT is compared to the RTX 3050. Hence, the RTX 3050 delivers 45% more performance than the AMD RX 6500XT. Provided that AMD's 6500XT was still used in the PCIe Gen 4 X4 configuration, it performs 45% slower which is a huge difference, to be honest. Now let me show you, Ray Tracing's performance of these cards. I'm already telling you, the RTX 3050 will win but the purpose of this is to show how the 6500XT beats. 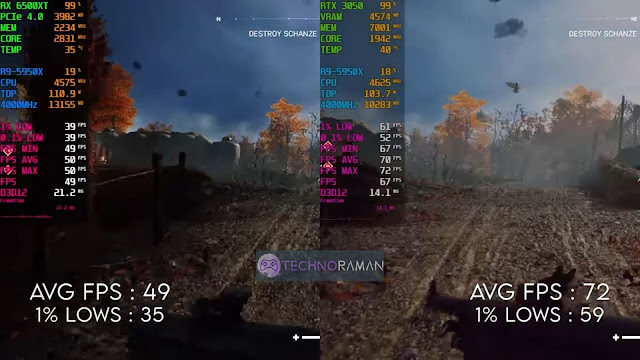 The first game is Battlefield V running on high settings with DXR set to ON. In this game, the RTX 3050 delivers 47% better performance than the RX 6500XT. To mention again, the 6500XT is running a PCIe Gen 4 X4 config. You know what happens if we run this in PCIe Gen 3 Config. I'm being generous to AMD so that it wins but sadly it can't. 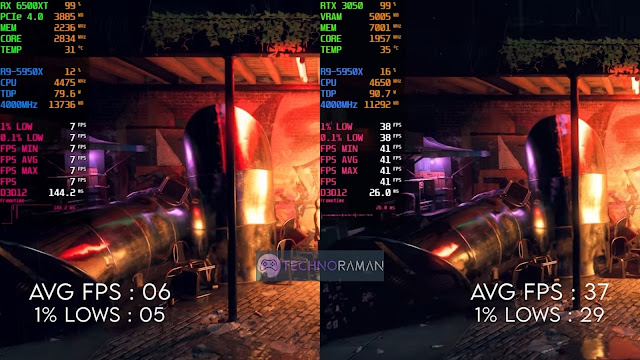 The next game is Watch Dogs Legion. If I tell you the performance difference you will pity a bad AMD card. You can see an average of 6 FPS. Like, literally 6 fps. See the difference, and here the RX 6500XT performs 6.2 times slower than the RTX 3050 in this ray tracing benchmark. 6.2 Times. Huge deal. 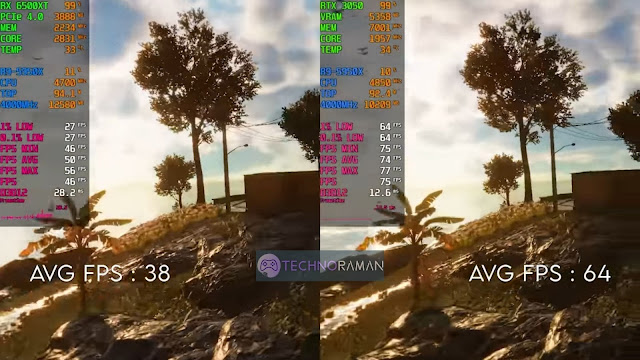 The next game is Far Cry 6 running at High Settings and DXR is set to On while Anti-Aliasing is set to Off. We get a difference of 68% here means the RTX 3050 performs around 68% better when compared to AMD. 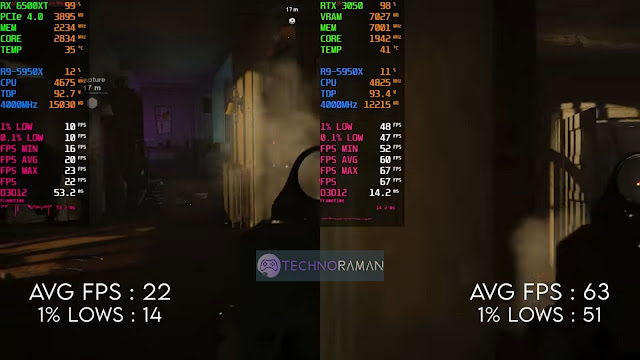 Moving on with the next title is Call of Duty: Black Ops Cold War which I've run at High Settings with all Ray Tracing Settings set to High. In this game, the RTX 3050 performs around 2.85 times better when compared to 6500XT. 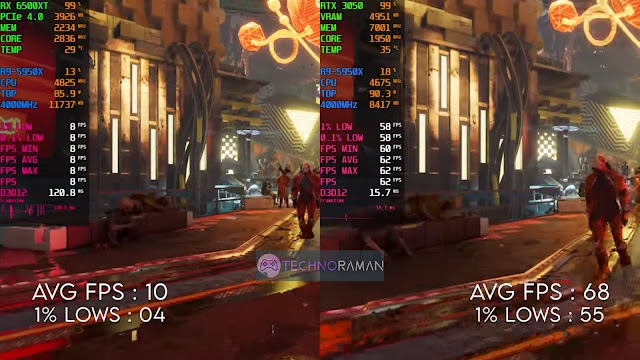 The last game is Guardians of The Galaxy which is run at High Settings. With obviously High DXR Settings. And again, the same shameful performance, the RTX 3050 performance is around 6.8 times better when compared to 6500XT. 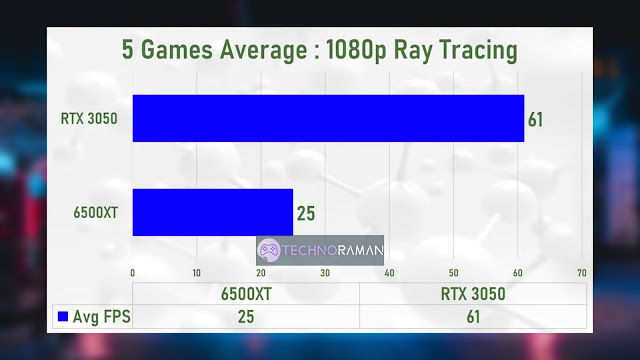 Taking an average of these 5 games, Ray Tracing RTX 3050 will perform 2.44 times better when compared to AMD's RX 6500XT. So, you can see that AMD's Card neither in Rasterization Performance nor in Ray Tracing takes the win. The performance differences are huge in numbers. Not small numbers but huge numbers. 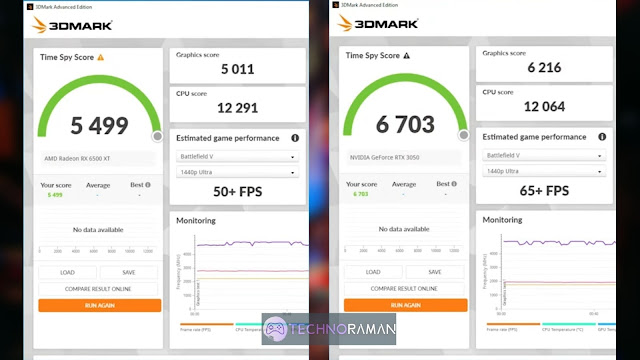 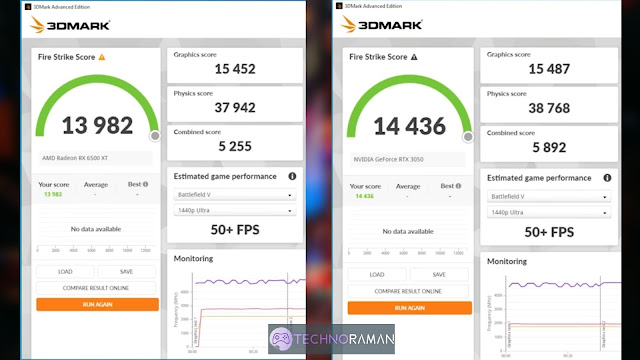 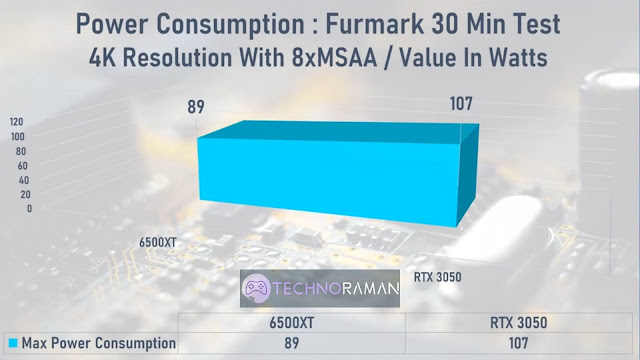 Proceeding with the next segment that is Power Consumption. The benchmark used here is Fur Mark, the resolution here is 4K, and Anti-Aliasing is set to 8X MSAA. I've run it for 30 minutes. The maximum power consumed by the AMD RX 6500XT is 89 Watts. While the RTX 3050 consumes a maximum power of 107 Watts. This is 20% more power when compared to AMD 6500XT. I'd like to tell you something, the performance differences are really huge and I don't care if my card consumes 20% more power because again, the performance differences are huge. Concluding these benchmarks, all I can say is I've never seen a worse card than the AMD's 6500XT. You've probably seen all the benchmarks and I guess I've given you an idea about which one should you buy, and which one to avoid.

Let's talk about their pricing. The models I've used in this post like Zotac's Twin Edge OC Edition if we talk about its pricing it will be available for around 40,000 Rupees. Another card that is Asus's 6500XT is the Tuf Gaming Edition it will be available for around 36,000 Rupees. This pricing is for today's date, that is the post upload date. These prices may vary in the future, don't expect it to drop through. If I talk about the other options or alternatives, in the market from Nvidia you'll see the 1660S, 1650S, 1660Ti. Don't put 40-50,000 Rupees in these cards. If you're looking for a card from Nvidia then buy the RTX 3050. That's all about the pricing.

I'll tell you about the performance in detail. It must be clear after watching the benchmarks that the 6500XT lies nowhere near the RTX 3050. The price difference is 4-5,000 rupees on average, but the performance you get with 3050 is very high, so in terms of Rasterization Performance as well as Ray Tracing the 3050 Wins. plus, you get Hardware Encoding in 3050 which the 6500XT lacks. You can stream, you can record games if you want, if you use software like Premiere Pro which uses Hardware Encoding can be easily used with 3050 but not with 6500XT.

So, from mine, as well as from the other's side to is a big no for 6500XT. PCIe Gen 3 X4 is also a concerning factor in 6500XT. If you have old hardware and you use 6500XT you'll see even more performance decrease and limitations the differences will be even higher in 6500XT's case. To be honest, 6500XT is a worthless card.

If you're paying 40,000 Rupees for RTX 3050 so do take one more recommendation, you can purchase RX6600 from AMD. In comparison to RTX 3050, it performs better overall. It's pricing, I say it because there is not much of a difference and I've seen that Graphics Card it could be selling for 48,000 Rupees now but I've seen it selling for 46,000 Rupees in Facebook Groups. The difference is Rupees 6000 but the performance is really good. You can consider AMD's 6600 for a while.

The short and simple answer say no to 6500XT 3050 still can be considered for a while. Being sold overpriced, We can't do anything about it. If you really need to buy then you can consider it but sadly, Graphics Cards are not available at MSRP. Even the entry-level Graphics Cards are being sold for 40,000 Rupees. If you like our article then share and comment.

What types of jobs can bloggers do? - Techno Raman

Which is the best gaming processor in 2021?